“That’s unprofessional,” one of my LPOs on the ship told me as I scribbled a reminder on the back of my hand. It was his passive-aggressive way of telling me to stop doing it. I didn’t listen because 1. it wasn’t an order and 2. I have a bad attitude.

Fed up with my bullshit, my chief told me explicitly to stop, which I did, for the most part. I started writing on my wrist instead, right below the strap of my watch. I patted myself on the back, thinking this was very clever: it was more or less out of sight but still maintained the spirit of my stupid system. But of course they caught on to this, too, and the jig was up.

I was certain that, if a reminder about a task wasn’t immediately in front of my face, I would forget about it for good. I’m like an infant with object impermanence, but for things to do: once it’s out of sight, it’s completely out of mind. I had to find some other way.

If you’re in the military, you’ve seen those little memorandum books: green, pocket-sized, reporter style. The memo notebook’s larger, hard-covered cousin, the logbook, was a precious and scarce commodity on the ship; having one of those was a status symbol. The highest tier of Navy notebooks was the leather-bound, magnetic-clasped varieties carried around by Chiefs and Chief-aspirants.

In other words, this was me, your typical shitty E-4: 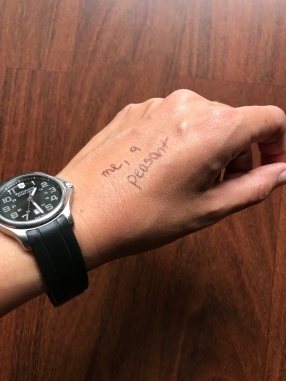 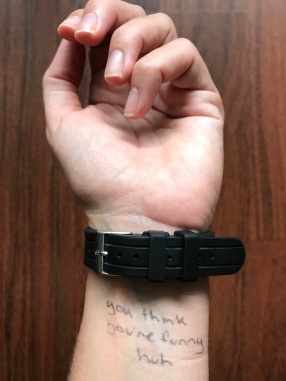 This was your workcenter supervisor:

This was your LPO: 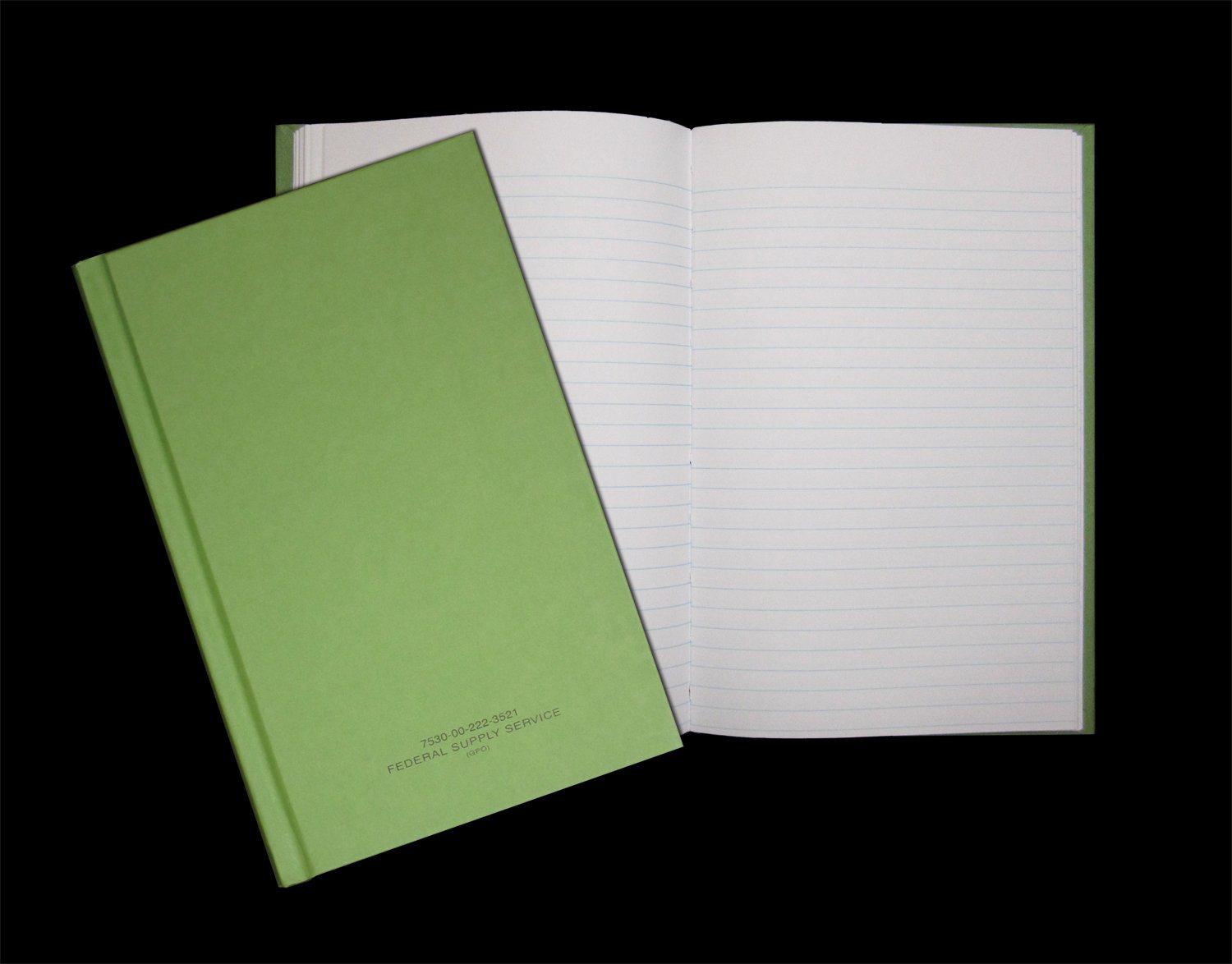 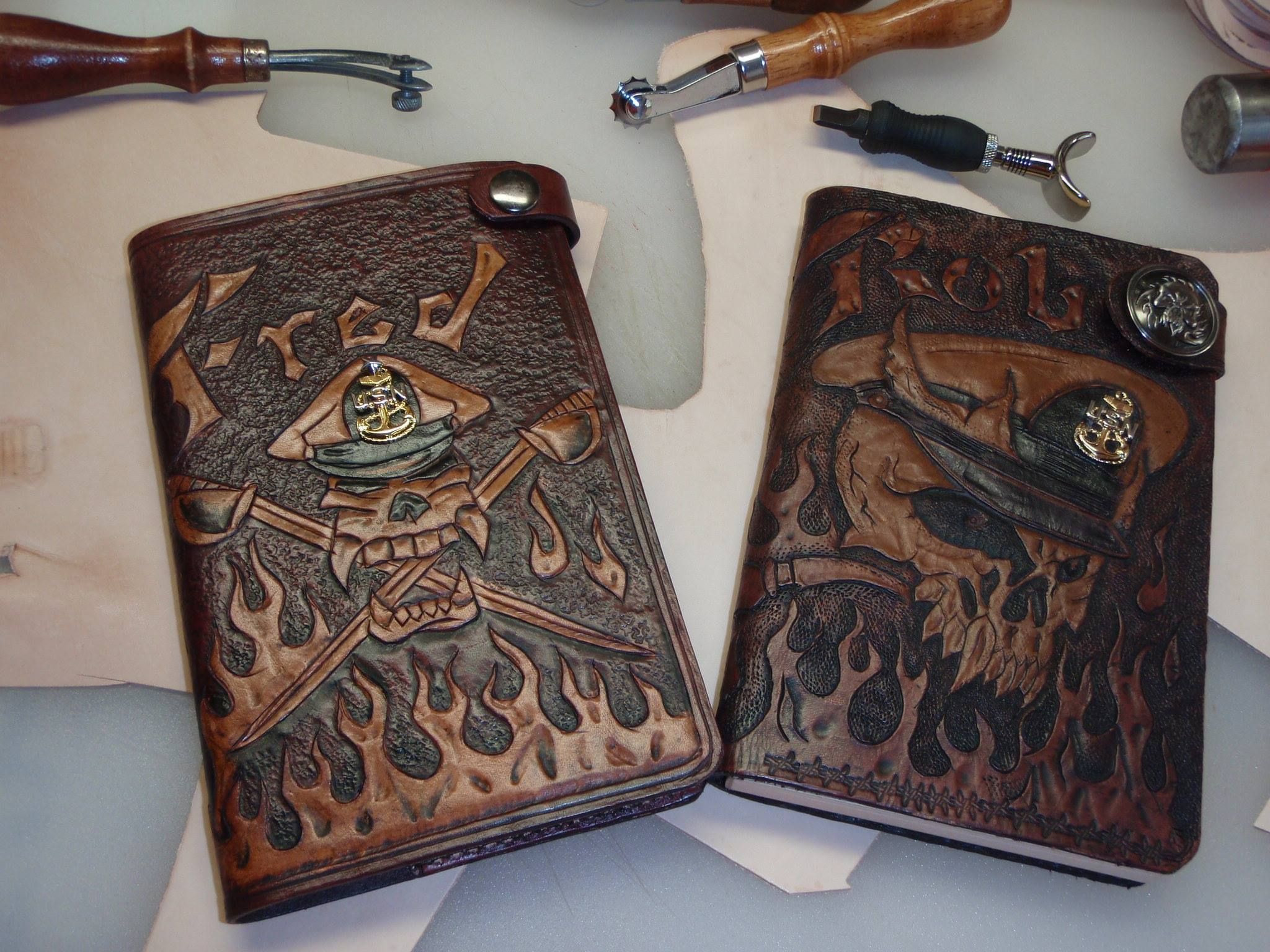 So I started small, with one of those little memo notebooks. For the most part, it worked out pretty well. It fit easily in all my pockets and it was so cheap and common that I could scribble all over it without feeling any sort of organizational impulse.

I mentioned that it was cheap. What I mean is that it wasn’t durable, and ship life takes a toll on things. This little book was rained on, sweated on, HAZMAT’d on, put through the laundry once or twice by accident. But for all I put it through, it’s still more or less intact and (arguably) legible. 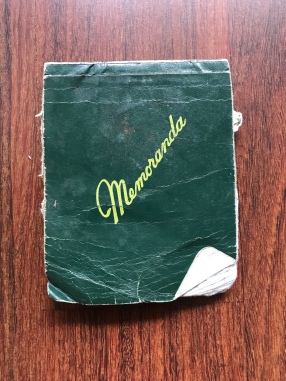 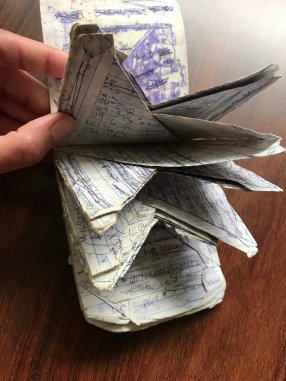 And then bullet journaling hit the internet like a ton of bricks.

It is an incredibly, almost insultingly, simple method of organization. It takes a list of tasks and breaks down big, long-range plans to the smaller, daily tasks. A bullet journal, at its essence, is an agenda that you design for yourself from a blank notebook. The original method suggests organizing pages by year, then month, then week, but the appeal of the bullet journal – and why it became so popular so quickly – is that it gives you a broad framework under which you can develop a system that works best for you. And I was definitely in need of a new, better system.

In 2016, I started with one of those light green logbooks mentioned above. I had become a first class, after all. It was time to move up! The logbook withstood damage better than the memo book, but it was harder to carry around. Bulky and with sharp corners, it was not very pocket friendly.

But it was my very first bullet journal, the first journal in which I used an organizational method, not just scribbling and crossing-out on any available empty space. It took some getting used to, but it ended up being a really useful system. I felt more “on top” of things: less forgetting, less falling through the cracks, more reliable in showing up where and when I was needed.

Next, I tried a small, grid-lined Moleskine notebook. In the stationery corner of the internet, Moleskine is your basic bitch, but for me, anything that wasn’t military-issue was a huge upgrade. I used this style of notebook for two years – 2017 and 2018 – and it helped me learn what qualities of a bullet journal were absolutely essential for me. I had developed a system! 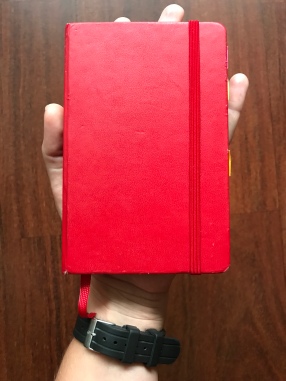 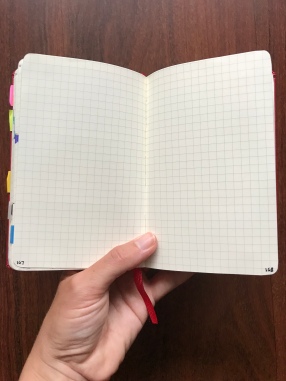 (Moleskine’s classic notebook. Pocket-sized. $15. An entire year in the size of my palm.)

Here are the elements that have been consistently included in each new iteration of my journal:

Everything from the index to the blue brains comprises the first quarter or so of the notebook. I like to keep the odds and ends separate from the logs. This is what this year’s index looked like: 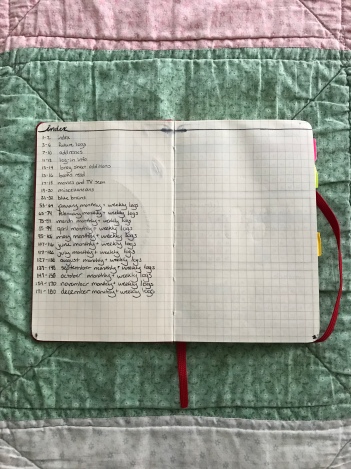 You can see how I would be devastated if I were to misplace my bullet journal. It contains an entire year’s worth of data. That’s why it’s so important to me to keep it close and handy at all times: it has become an extension of myself. One of my mentors calls his notebook an “external brain.”

Here is an example of what it looks like on the inside. A typical monthly and weekly log: 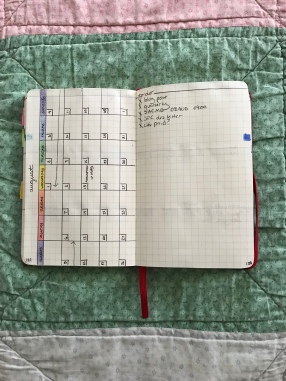 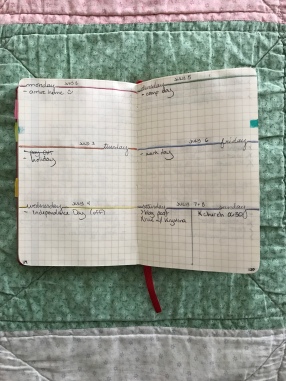 The monthly “to do” stuff carries over through the weeks ahead. Once you write down a task, the bullet journal system forces you to address it in some capacity: complete it, move it forward or backward, or delete it if it becomes irrelevant. This is ideal for tasking triage, or managing the most important, urgent stuff first. Used correctly, nothing gets lost, even amidst the chaos.

You can see how there is some bleed-through on the pages and how the binding on the notebook is coming a little loose. For 2018, I am trying a new brand of notebook: the Dingbats pocket-sized notebook. It is almost identical to the Moleskine, but has better paper quality and appears more durable. But that’s the only big change. With small tweaks here and there, I’ve found a way of staying organized that works really well for me – without being unprofessional.

If you’re looking for a way of staying on top of your to-do list in a way that makes sense to you, why not start from scratch? Bullet journals give you a loose but usable structure, flexible enough for you to manipulate it as it works best for your own life. It has helped me quite a bit; I can’t imagine not using it anymore. If you are interested, here are some resources on how to get started.

The official bullet journal website
Why I started a bullet journal, and so should you (Financial Times)
Why do millennials love bullet journals? Control. (Vox)
The Bullet Journal, Minus the Hype, is Actually a Really Good Planner (Lifehacker)
Bullet Journaling for Beginners (and Impatient, Unartistic People Like Me) (Medium)

1 reply on “Bullet Journals and Me”

[…] inspiration. Folks are unbelievably artistic and creative when it comes to their bujos. Now that I’ve found the format the works for me, though, I’m sticking to […]